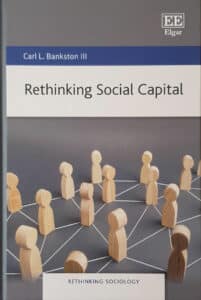 Combining theoretical approaches with practical applications, Rethinking Social Capital delineates the meaning, uses, and problems surrounding the concept of social capital. Carl Bankston, a leading scholar in the field, offers a fresh take on the topic, presenting an original way of understanding social capital as a process.

The book provides key definitions of social capital, describing its functionality, the surrounding theoretical issues, and its relationship with social structure. Examining capital in its various forms, Bankston discusses the complications of defining social relationships in a financial resource analogy as investments in future outcomes, and proposes an alternative of an original structural model that approaches social capital as a process. Chapters then explore the major applications of social capital theory: to families, communities and education; to formal organizations and informal networks; to class, race, ethnicity and inequality; and to the nation-state.

This cutting-edge book is invaluable in clarifying ambiguities surrounding the concept of social capital to students and scholars of the social sciences. Its practical applications will also prove useful to policy makers and public policy institutes.

In his brilliant book Rethinking Social Capital, Professor Bankston challenges the orthodox assumptions of social capital theory. Bankston questions and probes the meaning of the concept of social capital to uncover the deeper significance of different interpretations currently found in the literature. The book focuses our attention on the capital nature of social capital, helping the reader to understand the conceptual approaches that adhere to the metaphor of capital and those that are marred by tautology or conflation of outcomes with substance. Professor Bankston’s discussion of negative social capital is an excellent illustration of this point. Bankston points out that an investment in social capital may fail to pay off, may benefit some people at the expense of others, or may have some undesirable externalities. He reminds us that social relations are rarely universally positive; therefore, social capital does not have universally positive outcomes. “It is hard to see how a resource for investment can be [wholly] negative” (p.150). Bankston explains the nature of social capital is accumulated assets, helping scholars to clarify what social capital is and separate it from what it does. The book also discusses the important issue of the application of social capital theory. Bankston discusses families, communities, education, formal organisations, and informal networks. He explores the role of class, race, ethnicity, and inequality and the important policy implications. Rethinking Social Capital is an important resource for anyone interested in social capital from either a theoretical or practical perspective.

‘Rethinking Social Capital demystifies the idea of social capital and clarifies the various ways in which the term is used. Bankston thoughtfully and critically brings the disparate theoretical elements into a coherent model and applies it to investigating how social categories serve as historical sources of social networks and how different forms of networks within categories sustain social stratification. The book is beautifully written, and the narrative is captivating and engaging, offering a nuanced approach to understanding the roots of socioeconomic, racial, and ethnic inequality, as well as the contributions and limits of social capital theory.’
— Min Zhou, University of California, Los Angeles, US

‘Carl Bankston has produced an important book that, I predict, will be read with profit by social scientists for many years to come. His theoretical analysis of “social capital” is original, comprehensive, rigorous and provocative. His critical mastery of the relevant literature is unrivalled. Rethinking Social Capital is a major achievement.’
– Glenn Loury, Brown University, US

The eBook version is priced from £20/$26 from eBook vendors while in print the book can be ordered from the Edward Elgar Publishing website.