The contemporary discourse on Social Capital builds still on Nahapiet and Ghoshal’s (1998)[1] three-dimensional model, which is presented in Figure 1. Their article has been cited more than 9430 times (2014) and has become a top article in business strategy discussions. The authors provide a description, based on empirical and conceptual studies, of how Social Capital contributes to organizational innovation by creating intellectual capital, and describe a series of hypothesized relationships between dimensions of Social Capital and processes necessary for the creation of intellectual capital.

The first component – Social Capital (Figure 1, component I) – consists of three dimensions, namely the structural, the relational and the cognitive, which influence processes of combination and exchange of intellectual capital. The structural dimension addresses properties of the social system, containing the impersonal linkages between people or units and refers to the connections between actors, such as a social network, providing individuals with the accessibility to information or resources. Key facets are network ties, configuration, such as hierarchy, and appropriable organization. The relational dimension, ‘refers to those assets created and leveraged through relationships’ (Nahapiet & Ghoshal, 1998, p.244[1]), for example respect and friendship. Actions differ considerably according to one’s personal and emotional attachments to other network members. Key facets are trust and trustworthiness, norms and sanctions, obligations and expectations, and identity and identification. The cognitive dimension reveals resources in the context of  knowledge sharing and knowledge creation. ‘It refers to those resources providing shared representations, interpretations and systems of meaning among parties including shared language and codes and shared narratives’. This cognitive dimension is important for the creation of new intellectual capital (ibidem, 1998, p.244).

Figure 1. The three-dimensional model of Social Capital and creation of collective knowledge (Nahapiet and Ghoshal, 1998)

Nahapiet and Ghoshal further distinguish collective actions (Figure 1, component II), which are crucial in the process of creating intellectual capital. They describe these collective actions as the ‘combination and exchange of intellectual  capital’.  This stage consists of four conditions for the creation of new capital, namely access to parties who possess knowledge (D), anticipation of value to be created (E), motivation to engage in knowing activity (F) and ‘combination capability’ (G), being the ability to recognize, assimilate and use new knowledge. Together, these four conditions form the heart of the framework and lead to new intellectual capital. Nahapiet and Ghoshal present the complex relationships between the three dimensions of Social Capital and the four conditions (see the arrows in Figure 1) as hypotheses that require further investigation. 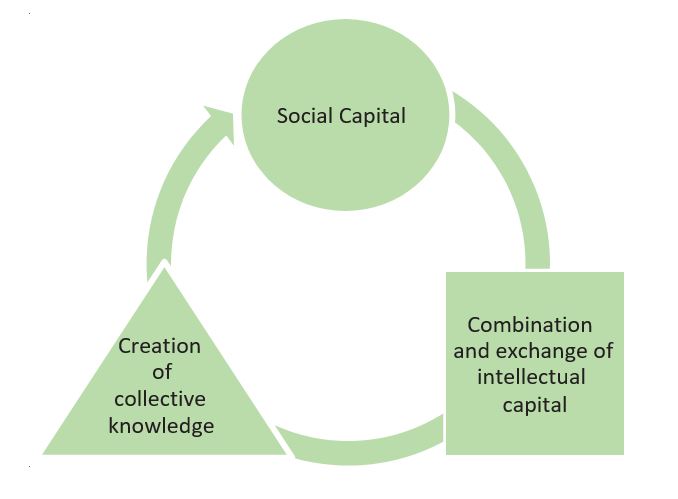 Nahapiet and Ghoshal are well aware of the limitations of their model and recommend further development through research. Only a few empirical studies have investigated the entire model (Kaasa, 2009[3]), namely those conducted by Tsai and Ghoshal (1998)[4], Hatzakis, Lycett, Macredie and Martin (2005)[5] and De Jong (2010)[6]. Parts of the model were confirmed by investigations reported by, for example, Adler and Kwon (2002)[7], Kostova and Roth (2003)[8], Leana and Van Buren (1999)[9], Falk and Kilpatrick (2000)[10] and Hanson (2008)[11]. Although studies have shown the impact of the three dimensions on innovation, a consistent use of terminology concerning the investigated facets, conditions and dimensions still seems to be lacking. What is called structural in one study, is called cognitive or relational in another. Studies mainly focus on the structural dimension, while the relational and cognitive dimensions have hardly been investigated, as De Jong states (2010)[6]. Research on the multi-dimensionality and coherence of aspects is still scarce. Supportive for further development of the model is research that allows close collaboration between researchers and practitioners (Adler & Kwon, 2002[7]; Moolenaar, 2010[12]; Weber & Weber, 2007[13]).

Pages in this article: One Hundred Years of ‘Social Capital’