This article addressed the issue of the added value of the concept of Social Capital to innovation. The previous sections discussed the origins and evolution of this concept, presented its core and compared it with prevailing theories on innovation. This section reflects on the main question and discusses implications for further study of innovation processes from the perspective of Social Capital and for the use of the concept as guidance in the practice of sustainable change.

To summarize, the concept of Social Capital appears to have its origin in the field of educational innovation, almost 100 years ago. The renewed attention in social sciences, many decades later, proved its attractiveness for innovation purposes in different domains. Especially the three-dimensional model of Social Capital by Nahapiet and Ghoshal (1998)[1] presents clearly how the dynamics of Social Capital facilitate the exchange of knowledge and result in creation of new collective knowledge. In this way, Social Capital theory presents a holistic view on innovation processes, addressing different elements as networks, relations and affections, trust, common goals and shared understanding, tacit and explicit knowledge, knowing capacity, and interaction for collective knowledge. Especially research conducted in the past decade has led to more detailed insights into the dynamics and the multifaceted character of Social Capital and enhanced the use of this theory as a guideline for innovations.

Despite its origin and the increasing attention in very different domains, Social Capital theory remained fairly unknown in education field. In this domain, other theories and models prevail. Searching for the added value of Social Capital theory, this article has presented some leading theories that design and research innovations in education. All the theories discussed, emphasize important elements for understanding educational innovation. What they all have in common is that they are grounded in empirical research. But there are differences too. For instance, Rogers’s diffusion of innovation and the CBAM both elaborate on implementation of an topdown innovation, neither theory covers all phases of the innovation process as Social Capital theory does. Of the theories presented, the CBAM provides the most elaborate tools and instruments for guiding change, whereas the other discussed theories are much more generic. The main advantage of CHAT is its focus on creativity, but it does not consider the relational and affective elements. Social network theory emphasizes the importance of sharing information, but does not provide details about the process or does not show how this can be organized.

The main advantage of Social Capital theory for innovation seems to be its comprehensiveness, as it addresses many elements that play a role in innovations. It not only refers to investment in social networks or relationships, but also emphasizes  the necessary cognitive quality of connections and collective actions to produce new knowledge and knowledge products. It focuses on the powerful creativity of the connections and their collaboration. 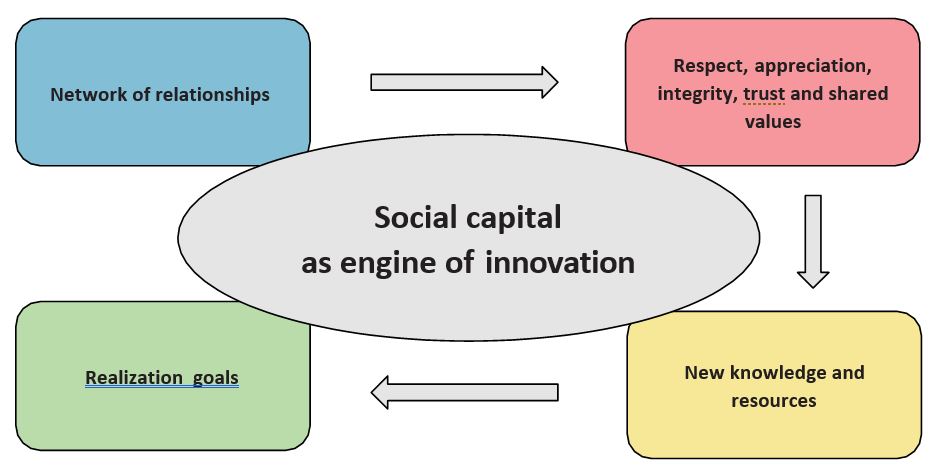 Social Capital theory offers a holistic framework for the dynamic and complex process of co-creation. By doing so, it emphasizes the role of the actors/professionals as co-creators in innovation, and clarifies the necessary conditions in structure, relations, cognition and actions for the co-creation of new value. Social Capital theory does not provide procedures or rules for innovation, but its dimensions could be used as guideline for innovators.

In the last decade, educational innovation has comprised large-scale projects between several layers within an organization or between educational field and industries. This is often a diffuse process and it is not clear what will be the final result of the innovation. In these types of complex innovations positive social relations are necessary to connect the creativity and collective knowledge of the professionals. Such positive work climate will encourage them to be knowledge productive (Kessels & Keursten, 2002[2]) and ensure that the innovation is sustainable.

For this reasons, Social Capital theory seems to be most promising for explaining and designing these kinds of complex innovation processes. It specifies the value of the social processes for the creation of new collective knowledge, as Kessels and Poell describe (2004)[3]. The most important contribution of Social Capital theory is:  it makes clear that innovation should be viewed and guided from the perspective of the collectivity of professionals, because they are the intellectual and Social Capital of the organization, the hidden power that has to be revealed. Altogether the insights so far allow the conclusion that the theory of Social Capital appears to fit much better to the complexity of innovations in which professionals are perceived  as responsible innovators. In this way, innovating is a way of collective learning and acquiring of new knowledge and skills at the workplace.

It is worthwhile to conduct further research on innovation through the lens of Social Capital theory, to obtain more insights how professionals can handle complex innovations. The model of Nahapiet and Ghoshal offers a suitable framework for that purpose. Although it is promising as a theory, we are aware of possible limitations that need to be considered in further research. As researchers suggest (De Jong, 2010[4]; Kilpatrick, et al., 2003[5]; Moolenaar, 2010[6]; Nahapiet & Ghoshal, 1998[1]) more clarity about the theory and its use can be provided by longitudinal or participative research in the complexity of the innovation processes, to see the dynamics of the components of Social Capital ‘at work’ and to discover factors that stimulate or hinder learning and innovating. Special attention could be given on the emotional aspect of the relational dimension, as previous research on the Social Capital model recommended this aspect (Weber & Weber, 2007[7]). It also would be interesting to focus on the collective actions, such as the decision-making process, because these elements are not yet worked out in the theory of Nahapiet and Ghoshal. Earlier scholars describe components of what we would call the ‘action dimension’ (Hanifan, 1916[8]; Coleman, 1990[9]; Lin, 2001[10]) but it is not yet connected to a coherent theory. A third important element to pay attention to in future research could be the ‘building’ of Social Capital. Then, as Woolcock (1998)[11] stated, ‘… it is logical that we would want to improve it, and at least maintain it, so as not to lose its significant benefits.’ In a society that needs creativity and innovation not only for economic purposes and educational goals, but also as a condition for life-long learning, the Social Capital perspective could become the power that drives sustainable innovation.

Pages in this article: One Hundred Years of ‘Social Capital’