How to measure social capital

A guide for the measurement of social capital at any level in any context.

There is almost universal agreement that social capital is difficult to measure with a high degree of validity. Demand for relevant empirical measures has continued to outstrip supply. You have likely found this article because you are looking for (and not yet found) a suitable instrument for measuring social capital. This article may help, but unfortunately there is no silver bullet; no perfect tool for social capital measurement.

Measurement based on a single indicator?

Past approaches to measuring social capital have ranged from simply using one indicator (e.g. trust) to using complicated groups of indexes. Most investigators now agree that due to the multidimensional nature of social capital a wide range of indicators should be used.

So if you’re looking at an old study that used one or even a few indicators you should move on to something more recent and more rigorous.

Measurement must be linked to the theoretical underpinnings of the concept

A good starting point is with the different types of social capital. Depending on your theoretical preferences you may like to take into account one or both of the perspectives below.

Bonding – social ties between individuals within the same social group or with others who are primarily like them. Read more about bonding social capital.

Bridging – social ties that link people together with others across a cleavage that typically divides society (like race, or class, or religion). Read more about bridging social capital.

Linking – social tie (often a bridging social tie) to those with power that provides one with the capacity to gain access to resources, ideas and information from formal institutions beyond the community. Read more about linking social capital.

Relational – is based on the characteristics of social relationships between individuals and is commonly described as including trust and trustworthiness. Read more about relational social capital.

This theoretical perspective could be expanded to include potential indicators for each type of social capital. Below is an example prepared by the Network for Business Sustainability (nbs.net). 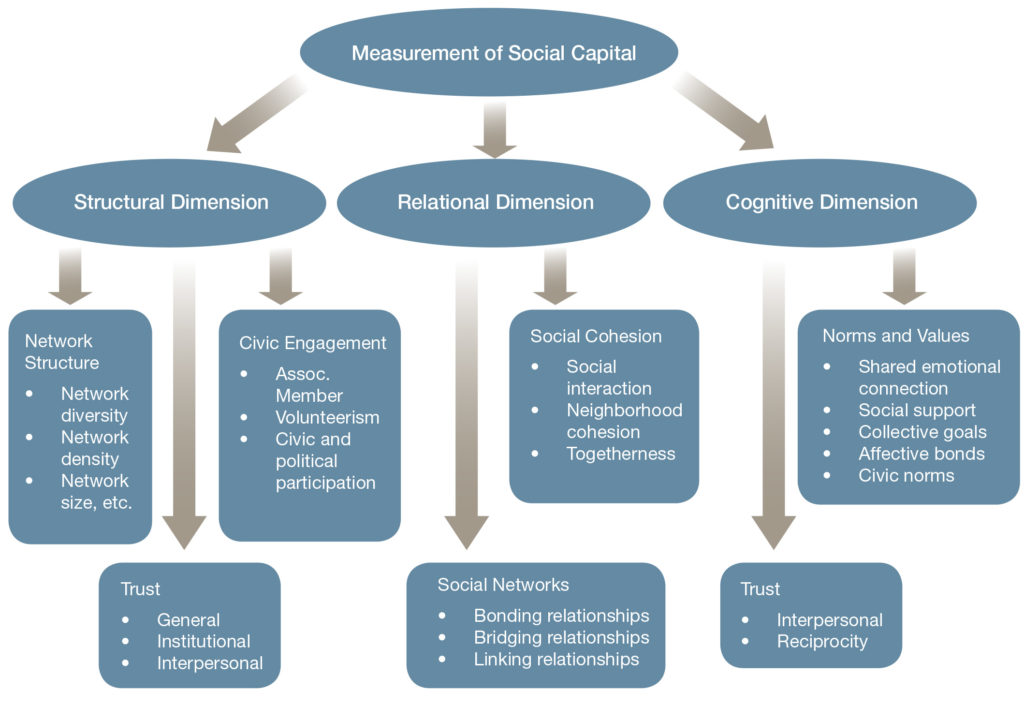 Most investigators tend to summarise the components of social capital into four broad categories:

The OECD concluded that there is convergence around a number of key dimensions:

The important point here is that the instrument of measurement must be closely related to the theoretical understanding of social capital.

Measurement of social capital depends on the level of analysis (individual, group and organisational, community and national), and also on the interests of researchers – whether they are interested in the source, form or consequences of social capital.

Measures at the national level may be of little or no relevance at the organisational level so care needs to be taken to ensure the measure is appropriate for the level of analysis.

For example we may measure membership in associations as an indicator of civic engagement which is thought to be a dimension of social capital (at the macro level), but could also be an outcome of social capital. This can be somewhat resolved by clarifying the focus of the analysis.

The type of measurement will depend on the scale of interest. Generally there are three different levels:

At this level social capital is a community level resource or ‘collectively-owned capital’. Due to the challenges of data availability measures at the macro level often use secondary analysis of existing datasets not collected specifically to measure social capital. These datasets could include country level census data, or the World Values Survey, the European Values Survey, the General Social Survey, and the Index of National Civic Health in the US.

Because the data was often not collected with the intent to investigate social capital the indexes are often “best fit” and often not rigorously related to the theory.

Unfortunately many of the previous studies at this level looked primarily at the structural
and relational dimensions of social capital. They have missed the very important cognitive dimensions that influence individual actions that have productive outcomes.

The structural dimensions include:

The relational dimensions include:

Where cognitive social capital has been investigated it is mostly attitudinal and value-based and include:

The context of any group or organisation is important

A generic social capital measurement tool may ask about the relationship with suppliers, but this will not be relevant to all organisations. The nature of the group, its activities and purpose will determine the aspects of social capital that are important and therefore what data is relevant.

Measurement of social capital is less problematic at the individual level given greater specificity of the indicators, which are derived from social network research.

Given the lack of agreed methods for measurements, researchers tend to identify the important elements or factors that suit their research context and develop their own instrument.

We must be critical of the relationship between the instrument and theory, and any assumptions about causality.

This is very effective in most cases as long as the researcher has sufficient understanding to develop an instrument informed by theory, and the ability to be critical of the potential for the instrument to make assumptions about the connection between the proxies being investigated and the elements of social capital.

There are now many different measurement tools available that may be utilised or modified to suit the context of interest. Care must be taken to ensure that the instrument is rigorously linked to the relevant theoretical understanding of social capital.

We need to be aware that much of the data we use to measure social capital is subjectively derived. Much of it tends to be opinion, feeling or belief that is heavily influenced by the way in which it is collected.

Social capital measurement can be self fulfilling if we are not careful.

Even the wording of a question can significantly influence the response so care must be taken to ensure that social capital measurement is not self fulfilling – ie that we don’t find exactly what we set out to find without questioning the means.

Most of the cognitive dimensions of social capital are “pre-reflective”, often requiring some reflection for us to be able to articulate their nature. The amount of reflection may affect the response because an initial belief may be different to an eventual conclusion after deep reflection of the situation.

Many cognitive dimensions are not fully conscious.

Often the method of our data collection limits the opportunity (time constraints) or willingness (not understanding the reason or importance) for reflection. This can result in widely varied responses that create noise in the data making it more difficult to identify patterns with statistical confidence. It can even result in inaccuracy.

Read more about the prereflective nature of social capital measurement and how this is an opportunity for building social capital.

11 thoughts on “How to measure social capital”