The definition of social capital has important implications for understanding change in social capital over time. For approaches that consider a new group to have no social capital, the starting point is zero, and if social capital were to change, it would be positive. Networks would be established that have the potential to mobilise resources. This potential may strengthen or weaken over time due to a range of factors, but it remains positive. It effectively precludes the possibility of negative social capital since the network has the potential for the mobilisation of resources or it does not; there are no negative outcomes.

For approaches that consider a new group to have some social capital, a new group starts with some level of social capital, and change may be positive or negative from this starting point. For example, if positive norms are established or reinforced, if trust is developed, if networks are established, etc. But it could change in a negative direction if negative norms develop or positive norms are not reinforced, or if distrust develops, etc.

If we apply this idea to the theory of group dynamics, we may expect a pattern similar to what is illustrated in Figure 5 (see Tuckman 1965 for discussion of the five stages of group development). During the forming stage, we may expect social capital to increase as people learn the purpose of the group and rules to be followed, trust and openness develop, and various norms are established for collective action. Then in the storming stage, members often challenge group goals and struggle for power which can undermine cohesiveness, potentially undermining trust and productive norms and patterns of interaction. In Tuckman’s framework, this is followed by a re-norming stage characterised by the recognition of individual differences and shared expectations where members begin to develop a feeling of group cohesion and identity, and cooperative efforts start to yield results that reinforce positive norms. Finally, the performing stage involves a mature and cohesive group that is capable of conflict resolution and has strongly established norms, trust, and sense of identity. 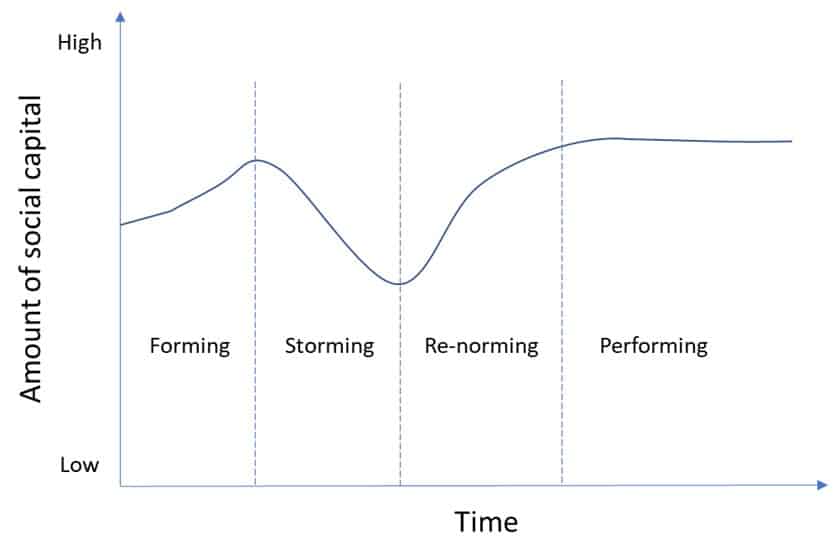