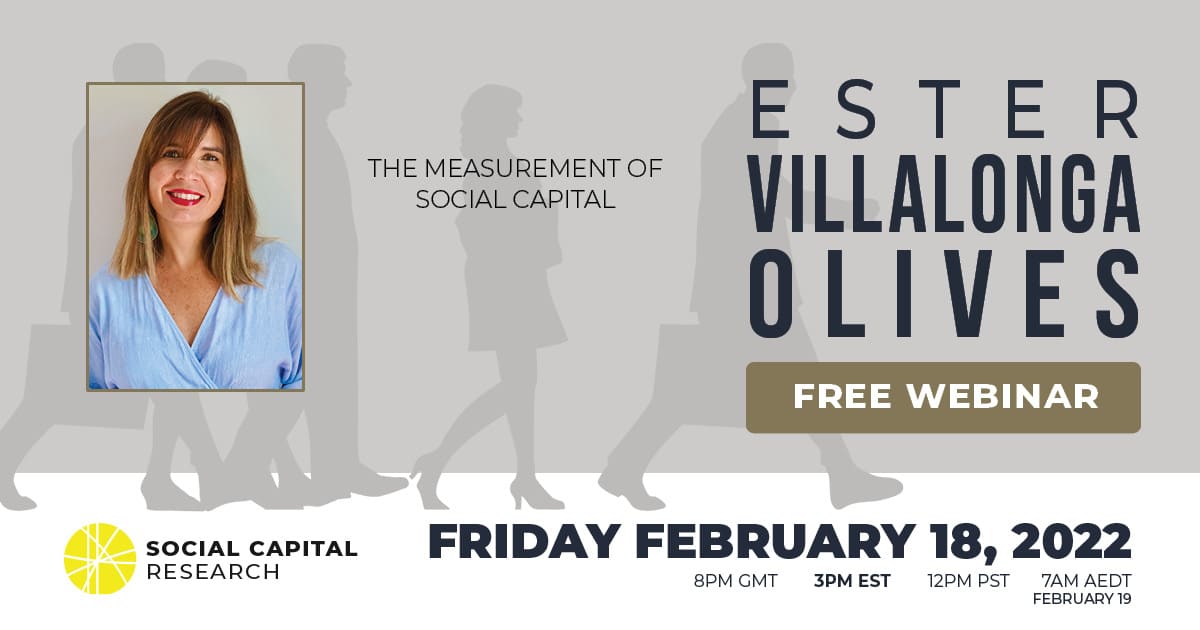 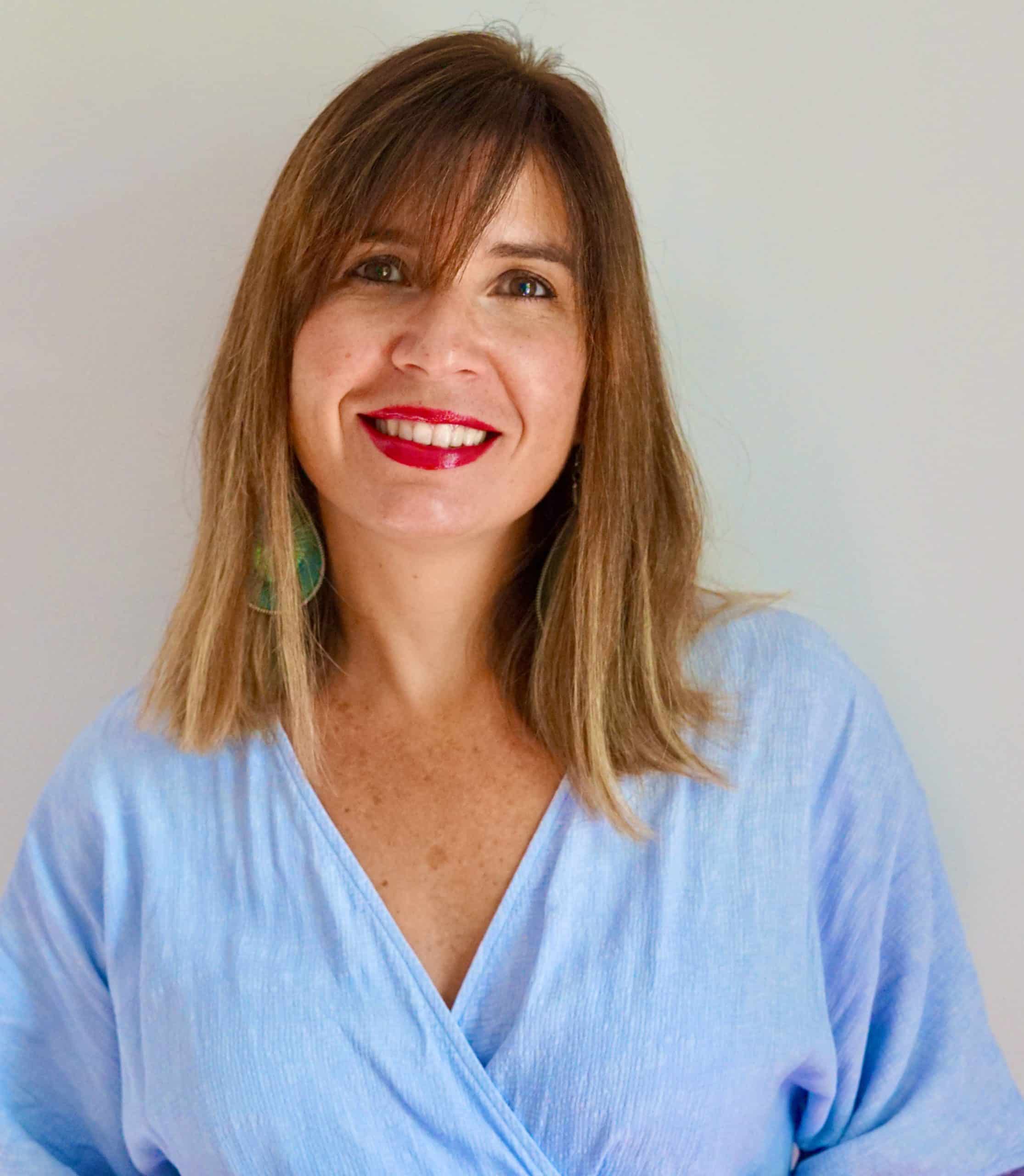 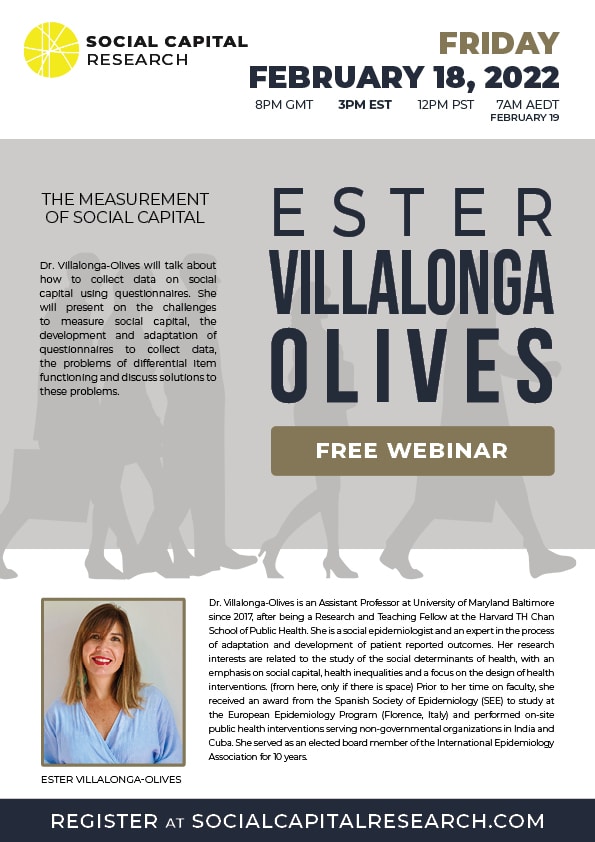 Dr. Villalonga-Olives is a social epidemiologist who holds a PhD in Biomedicine with specialities in Epidemiology and Public Health. She completed her BsC in Sociology and MsC in Sociology and Health at the University of Barcelona, including a long international stay at the Università degli Study di Trieste in Italy. She received her PhD with International Doctor Distinction from Universitat Pompeu Fabra, and completed stays at the London School of Economics in the UK and the University Medical Center Hamburg-Eppendorf in Germany. During her PhD studies, she received an award from the Spanish Society of Epidemiology (SEE) to study at the European Epidemiology Program in Florence, Italy, and performed on-site public health interventions serving non-governmental organizations in India and Cuba.

Dr. Villalonga-Olives has served as a teaching and research fellow at the Harvard T.H. Chan School of Public Health in the U.S., and has been a guest lecturer at Yale School of Public Health in the U.S. and University of Tarapacá, Chile. She has been a research scientist in the Department of Medical Psychology and Medical Sociology at the University Medical Center of the Georg-August-University of Goettingen in Germany. She is the past president of the European Young Epidemiologists group (2010-2014) and has been an elected member of the International Epidemiology Association board for 10 years. She is a member of the University of Maryland Greenebaum Comprehensive Cancer Center and of the international expert group on operationalizing social capital interventions in forced displacement situations lead by the United Nations. She has recently been awarded with a GLOBALtimore teaching fellowship by the University of Maryland Baltimore Center for Global Engagement (CGE).

Dr. Villalonga-Olives’ research interests are related to the study of the social determinants of health, with an emphasis on social capital, health inequalities and a focus on the design of health interventions. She has a background in psychometrics and has worked with patient reported outcomes -especially Health-Related Quality of Life- and has developed a patient reported outcome to assess bridging social capital. Her work is also centered on the investigation of the relationship between social capital and health outcomes with a focus on underserved and vulnerable populations such as immigrants and children. She is currently adapting cancer knowledge and health literacy instruments for Hispanics living in the US. The techniques that she has used include mixed methods, structural equation modeling, multilevel modeling and Rasch analysis.

Several articles published by Dr. Villalonga-Olives have received awards at international conferences. She has also served as a member of scientific and organizing committees at several international events. She currently serves as an academic guest editor for the Scientific Journal Plos One and the International Journal of Environmental Research and Public Health.