What is Cognitive Social Capital?

Nahapiet and Ghoshal (1998)[1] had originally related cognitive social capital to shared language and shared narratives, but other authors have described it also through shared goals or vision, and shared culture[4][5].

While the structural dimension can be observed in tangible relationships, roles, rules, and procedures the cognitive dimension is intangible as it relates to interpretations of a shared reality. It relates to Bourdieu’s theory of habitus[6] – a set of dispositions, reflexes and forms of behaviour people acquire through acting in society. Or it relates to Habermas’ theory of lifeworld[7] – the “background” environment of competencies, practices, and attitudes representable in terms of one’s cognitive horizon.

Cognitive social capital is often manifested in the use of specific language and codes. For example, certain words within an organisation may have different, or no, meaning outside the organisation[8].

Some authors conceptualise two (structural and cognitive) rather than three dimensions (structural, cognitive, and relational), for example van Bastelaer 2001[9]; Chou, Yuan 2006[10]; Grootaert et al. 2003[11]; Krishna and Shrader 1999[12]; Uphoff 1999[13]). These authors do not distinguish between cognitive and relational social capital and may use the term cognitive or relational. This has led to additional confusion in the literature about what is included in cognitive and what is relational social capital. 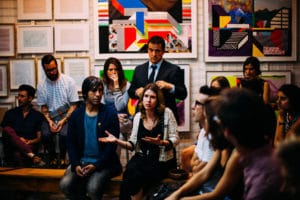 This confusion is exacerbated by the similarity and overlap of cognitive and relational dimensions. Both forms arise from the mental rather than the material realm, so both are ultimately cognitive. The distinction between the two dimensions is that the characteristics of the relational dimension are embedded in, or relate specifically to, social relationships. This is somewhat different from cognitive social capital that describes the wider social context rather than being a characteristic of specific relationships.

Shared understanding within a group, organisation, or community is cognitive, whereas trust and norms of reciprocity is relational as it describes the quality of, or is embedded within, social relationships.