Evaluation of the internal bridging nature of associations involves comparing membership composition of each association to the composition of the overall population on a large number of socio-economic dimensions, for example age, gender, education, income, religion, race, housing status, professional status, occupational classification, marital status, whether one has children.

Assessment of the external bridging potential relies on counting interconnections between associations and correcting this number for the relative size of each association. This gives information about the extent of overlap in networks with a higher degree of overlap representing more bonding social capital.

Let’s explore an example to illustrate the differences. A local Sheffield (UK) cricket team may have players who are socioeconomically similar – they may all work for local steel works, be predominantly white males between 18 and 40 years of age, have similar levels of education and income, and the dominant religion may be Christian. Many of the players may know each other outside of the cricket team, and many may also know other members of their families. They would likely live near each other and have gone to the same schools, attended the same churches, and been members of the same groups or clubs.

This represents a high level of bonding social capital by both approaches.

Contrast this to a local cricket team in Brisbane (Australia) where players would likely come from diverse backgrounds. Some may be university students, others may work in a variety of white and blue collar professions, and some may be unemployed. They may include a variety of ethnic backgrounds and have vastly different socioeconomic characteristics. They would be less likely to know each other outside of the team, and although they may live in the same area higher levels of mobility may mean few of them went to the same school, attended the same church, or were members of the same groups or clubs.

This represents a low level of bonding social capital by both approaches.

In both examples above, regardless of the methodological approach used to define bonding and bridging social capital, we find the same result; high bonding social capital in the first example and low in the second. This is because often heterogeneity of membership and interconnection between associations is related. Likeness of members is often related to the likeness of their associational memberships.

The binary nature of the distinction between bonding and bridging risks simplification and reduction in analysis. This is a significant problem if researchers and policy makers assume the two are strictly mutually exclusive.

The distinction is useful in describing social networks and in understanding the function of social capital. We must be careful to clearly define bonding social capital to ensure any empirical analysis is rigorously linked to our theory.

An integrated approach to measurement of bonding social capital 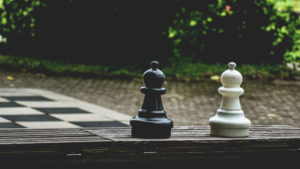 Researchers have developed a method to integrate internal and external approaches to bridging and bonding social capital by combining them into a matrix[2]. This is one way to combine both conceptualisations of bonding/bridging without further simplifying the research context. It may also be possible to create three categorisations rather than a simple binary. This would allow for a ‘middle’ type that is neither distinctly bonding or bridging. This approach would sharpen the distinction between the two extremes of the scale by not unnecessarily, and possibly erroneously, forcing associations in the middle of the ranking into either the bridging or bonding category.